This essay takes up our conflict about immigration, the polarizing nature of that conflict, and the ways it further erodes public or civic trust – the trust William Lynch, SJ, imagined as the basic “body of faith” which makes civic life possible. My question is whether immigration itself endangers our shared body of faith, or whether that body of faith is eroded primarily by political interests spreading fears, economic blaming, and false news about immigrants. My “case study” is not the present crisis at the southern border, but the post war immigration of Vietnamese refugees. I will begin with the Vietnamese in Denver and then turn to comments about immigration and our body of civic faith..

For more than a decade, folks from metro-Denver gather each Fall for the non-profit Bridging Hope’s annual fundraiser. It’s a dinner appropriately described as an “art and Vietnamese cultural event.” This year– as always with much Vietnamese music and dance and artworks for auction — it was held in the spacious parish hall of Denver’s thriving Queen of Vietnamese Martyrs Catholic Church. With roughly 400 in attendance – an almost equal mix of Vietnamese and other Americans – along with the young Vietnamese providing entertainment and the servers and auction managers who volunteer annually from University of Colorado’s Vietnamese Student Association. And with special guests like several Catholic Sisters from Viet Nam.

Many of the Vietnamese women wore the traditional Ao Dai, others elegant western evening attire. The men mostly wore suit and tie, though some dressed Denver casual. The non-Vietnamese Americans, both women and men, dressed in the full range of Western casual.

Now if this is beginning to read like a typical “women’s section” socialite fundraiser report, that’s deliberate. For this annual event is clearly a celebration of recent immigrant success. It both on the beauties of Vietnamese culture and the present needs of poor women and children in Viet Nam. Everyone came prepared with checkbooks and credit cards ready for auction and donation.

A bit more description. The dances featured both young women in traditional peasant dances and young men in a noisy and winding dragon dance. (My grandchildren and many Vietnamese children were entranced by the latter.) Music was provided by a superb pianist accompanying the parish youth choir. And later by a specially invited San Francisco women’s quintet (piano and strings) named Phuong Cam. They played and sang both Vietnamese and modern (Western) favorites, the latter often with audience participation.

The silent auction during drinks involved both classical (embroidered) and modern works by Vietnamese artists, as well as wine baskets and the like. The live auction ended with a minor bidding war for signed Denver Broncos’ footballs (the Vietnamese share our city’s love for our Broncos) and then a more significant bidding war for a beautiful wood-carved Vietnamese (Koto) zither-harp.

I here insert photos of two examples of the classical Vietnamese embroidery done by artists at XQ Hand Embroidery in Vietnam. The large originals (framed, 3’ x 5’) look, from a distance, like beautiful paintings. Only close-up can one see the silk threadwork of the eagle’s feathers and the old man’s hands. 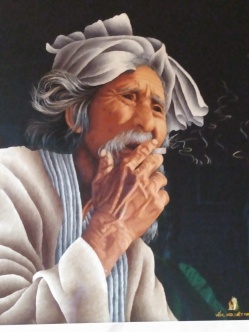 I’ve chosen these two artworks since for me the old man represents Vietnamese tradition and the soaring eagle the spirit of the Vietnamese people here and in Viet Nam.

Judged by their broad participation in Denver’s business and professional ranks, and by their great achievements at some of our best universities (Regis University, of course, but also the Colorado School of Mines and the University of Colorado in Boulder)…by their amazing fluency in English even as they preserve (in family life and religious community) their own language and traditions…and by their support for families “back home in Viet Nam” and for charities like Bridging Hope… By all such standards, the Vietnamese American immigrants are a remarkable immigration success story.

More than that, in these and many other ways they have made an equally remarkable contribution to civic life in cities like Denver and San Francisco and New Orleans. They have, in other words, contributed to the shared body of trust or civility which makes life in these cities workable and often very enjoyable.

Yet ‘twas not always so. Indeed, though I’d lived through those years I had forgotten the initial reluctance of many to re-settling these refugees onto our shores. And I had to be reminded that it was then President Gerald Ford who broke through that reluctance by opening our doors to the war refugees initially held in camps in places like the Philippines.

And I had to be told that to this day, despite their overall success, Vietnamese Americans in places like Denver still are regularly subjected to various forms of bigotry and discrimination.

Of course, none of this is new.  For despite the fact that all of us (with the obvious exception of the only truly “native” Americans) have immigrant ancestors, wave after wave of immigrants have been met with fear, distrust, and bigotry by our own forms of nativism or populism.

It didn’t start with Trump, though he now “capitalizes” on it (as he tries to capitalize on everything). His rhetoric of distrust for the stranger, the foreigner, the alien, whether African Americans or Muslims or the refugees imprisoned on our Southern Border, feeds on long-standing fears and prejudices.

Hispanic immigrants to this country have had, for longer and far more widely, the same kind of success story as I’ve described for Vietnamese immigrants. Indeed, here in Colorado (and in New Mexico and Texas and California) it is incorrect to speak about immigrants, since many Hispanics lived continuously here in the West well before we Anglos moved in with waves of conquest. I was recently reminded that Santa Fe (New Mexico) is the oldest continuous capital city in all of North America. Its full name remains the same as when founded in 1610: La Villa Real de la Santa Fe de San Francisco de Asís (“The Royal Town of the Holy Faith of St Francis of Assisi”).

Yet, again, we still hear and way too many accept all the propaganda about rapists and murderers and unfair economic competition.

3. The Civic Body of Faith

What my mentor William Lynch called “the body of faith” without which civic life is impossible is not a body of shared religious faith, though religion has (in virtually every culture and nationality we know of) contributed significantly to that more fundamental faith.

Nor was Lynch in any way romantic about such civic faith and trust. For our national (or local) body of faith has always been and will always be shadowed and threatened by fear and distrust. Fears based on real differences and on serious conflicts, and too often on real instances of violence and counter-violence.

Nor do I wish to be romantic about immigrants and other “others” – whether African Americans or Vietnamese Americans or Hispanic Americans. There are thugs and gangs on all sides of our immigration debates, as we are reminded daily in news reports. (Though I honestly don’t know of such among the Vietnamese in Denver.)

Lynch loved (as do I) Leonard Bernstein’s magnificent West Side Story. About gang tribalism between Puerto Rican and Anglos on the west side of New York in the 1950s. And about the power of love and tragedy to finally overcome the tribalism and fear. Written and composed by a major New York Jewish artist who himself exemplified the great success of American Jewish immigration. Along with so many other Jewish American artists, merchants, and politicians, Bernstein in West Side Story and in other ways made a major contribution to the civic body of faith in New York and throughout our country. (I urge readers who’ve never seen the film version, or haven’t seen it recently, to find it on Netflix or elsewhere.)

Enough. Probably too much. But I hope the point is clear enough. We live with our body of faith torn and threatened on so many sides. Perhaps most notably these days by perceived and propagandized fears about immigrants and refugees. And, give the realities of global warming, we are only at the beginning of the greatest global migration in human history. We can continue to allow this reality to polarize us, to diminish our civic trust and increase the fear on our streets – or with Bernstein, with Lynch, with the folks at Bridging Hope, we can again and again take up the task of building the trust that makes the human city possible.

View all posts by withacane

Past With a Cane posts